The TA31RCO-M150CP is the U.S. Army’s M150 Rifle Combat Optic. It is based on the US Marine Corps AN/PEQ-31 but has a different parallax setting. Both units are based on the TA31 ACOG. Unlike the USMC which felt that a ballistically optimized RCO was necessary for the M4 and M16A4, the US Army has gone with a ‘one size fits all’ ballistic solution to suit the M4, M16A2, M16A4 and M249. This perhaps reflects the lesser emphasis on accurate long range infantry fire in the latter service and simplifies logistics. 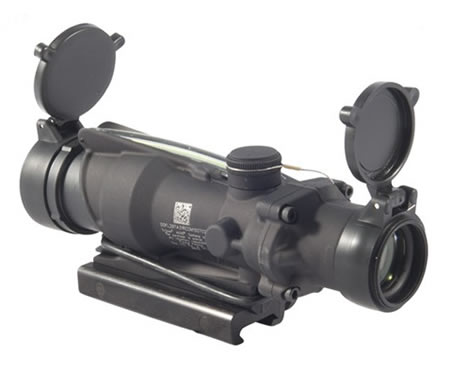 The M150 is intended to give the shooter a sight that will provide relatively fast target acquisition at close ranges and deliver aimed fire out to 800 meters. To this end it features a bullet drop compensating reticle with a large, red illuminated chevron aiming mark. The widths of the horizontal hash marks correspond to the width of a .5 meters (19 inches) U.S. Army silhouette target (man-size) at each range. The crosshair lines for the 100 to 300 meter (108 to 324 yds) ranges are illuminated at night. The small vertical lines are 5 mils apart and the large ones 10 mils apart. Illumination is provided by the combination of a Tritium light source and a fiber-optic light gathering device. The latter automatically adjusts to ambient lighting conditions. This combination provides for great illumination in almost all circumstances, the exception being shooting into a brightly lit area from a dark one. Trijicon developed the TriPower triple-illuminated reflex sight to overcome that seldom encountered problem, but at the cost of reintroducing batteries which are not required on the M150. Situational awareness is enhanced by the ability to keep both eyes open while engaging targets.

Magnification is 4X and objective lens diameter is 32 mm making this a 4X32 configuration. The unit is machined from aluminum forgings with a finish that matches most in-service weapons. The TA31RCO-M150CP ACOG is immensely rugged and easily adjusted without recourse to special tools. It is waterproof to 11 meters even with the adjuster caps removed. The M150 RCO comes with an AGF1-ARD Laser Filter and Anti Reflection Device (LARD) Combo Unit (NSN 1240-01-540-2890). The civilian version does not have the AGF1 laser filter component included. This unit is made of glass-composite and also matches the finish of the M4 , M16 and M249. It is secured to the M150 with a rubber strap. The M150 Rifle Combat Optic comes with the TA51 twin thumbscrew Picatinny rail mount which can be removed to allow carry handle mounting on the M16A2. 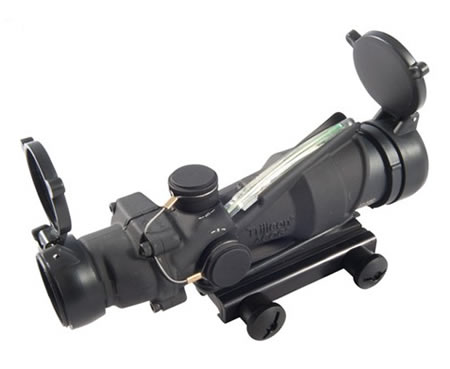 Check the price of the M150 Rifle Combat Optic at Brownells, a name you can trust.

We hope you find this video on the CMMG .22LR conversion kit of interest!

Full disclosure: If you purchase from Brownells I will receive a small commission. This will help keep this site online and will not affect your purchase price.

This entry was posted in Trijicon and tagged Trijicon. Bookmark the permalink.