Why would you choose an Aimpoint over an Eotech or an Eotech over an Aimpoint? While there is a pretty much infinite range of alternatives and combinations out there, the fact remains that, for many shooters, the choice in a reflex or red dot sight comes down to Aimpoint or Eotech. This is not only due to their excellence, but their widespread adoption by military and security forces and US police departments as near de facto standards. In some ways this is similar to the situation between the Trijicon ACOG and ELCAN Specter in the magnifying sights. 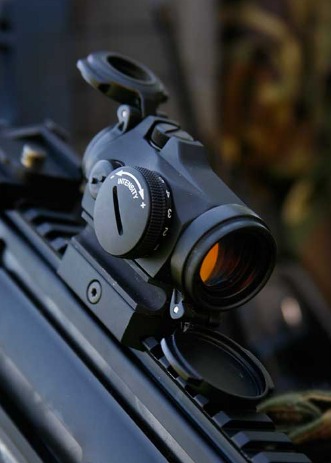 Now we’ll take two popular Aimpoint Models – the Aimpoint T-2 Micro and the Eotech EXPS-3. I chose the T-2 because it is the smallest, lightest Aimpoint with full night vision compatability and widespread military acceptance. It’s essentially a T-1 Micro with a much clearer red dot and better protected adjusters. The EXPS-3 Eotech has been standardised by the United States Special Operations Command (USSOCOM) and is likewise in widespread use with security forces world-wide. However, adoption as a standard military sight for infantry use has been far lower for Eotech products, presumably because of their perceived lower robustness. Off hand, the only major country I can think of that has standardised on the Eotech for infantry use is Spain on its railed version of the G36 rifle. With the G36 currently being the subject of considerable controversy and some litigation, it could be that even that role could turn out to be relatively short-lived. 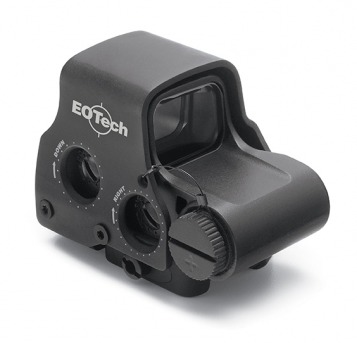 Robustness is hard to quantify, but a simple glance at the two systems will reveal the Eotech is more vulnerable to impacts in use. How big a deal is this? Evidently not enough to put USSOCOM off, but then they have an unlimited budget. Armies are not going to want the expense of replacing sights wrecked in training mishaps. That said, if the objective window of the Eotech is shattered, you will be able to see the reticle. Also, should the sight die completely, you can use the Eotech;s aperture as a rearsight and center the foresight in it, yielding acceptable accuracy for CQB style engagements. USSOCOM can also afford to have an offset small red dot sight on their carbines should they wish and the weapon in question almost certainly is fitted with day and night capable lasers and flip up irons. The operator in question could probably hit a man-sized target every time under ten metres quicker without using any sights at all. The 10 meter/33ft immersion depth is not that much of an issue as special forces types generally use O2 rebreathers for underwater insertion which trade simplicity and bubble-less operation for the shallow >6 metre depths imposed by O2 toxicity. If you really want to take your weapon scuba diving down to 80ft, buy an Aimpoint. 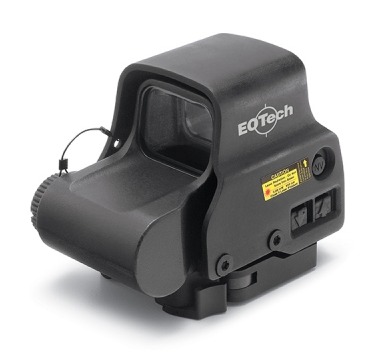 The Eotech copes better with different ranges – it can come with one, two or four one MoA dots inside its 65 MoA reticle to assist with aiming off for range. The one MoA dot is crystal clear which really helps with long distance aiming, particularly with the magnifier option. The Eotech also has a far wider range of brightness settings – a total of 30 of which 10 are night vision compatible. The Aimpoint Micro T-2 has 12 of which four are night vision compatible. I have never seen anyone claim this to be a problem thought, nor has it prevented widespread adoption by agencies that employ NV. Aimpoint have made great strides with the clarity of their red dot in the T-2, but it is still not quite as crystal clear as the Eotech 1 MoA dot and ring. That dot and ring system is widely accepted to result in fractionally faster target acquisition, and fractionally faster is often all it takes. Multiple dots for different ranges are another great option on the Eotech. Ditto the 1 MoA dot(s) vs the 2 MoA of the Aimpoint for better accuracy on those longer range shots. You should bear in mind however that Eotech has come under criticism of its products for significant zero shift under conditions of extreme cold. You should read this press release from Eotech before considering purchasing one of their holographic sights. 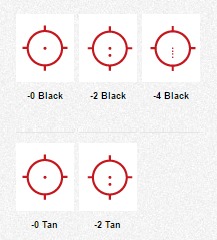 Both Aimpoint and Eotech offer magnifiers, but the new, shorter, Gen 3 Eotech magnifier is regarded as better in having external adjustments by some. IT comes with an integral flip to side system. The latest Gen 3 is 3.25 maginfication and comes with an easily operated QD lever. A 7mm riser is supplied to enable different co-witnessing configurations. It is available in tan or black with the flip to side mount for $549. 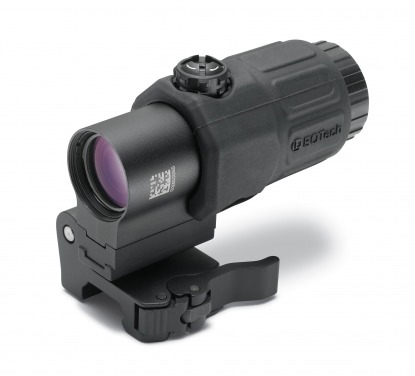 Aimpoint have really upped their game in the magnifier department. It used to be you were stuck with a very expensive magnifier and a twist off mount that was highly inconvenient compared to the flip type on the Eotech. However, Ampoint’s glass has always